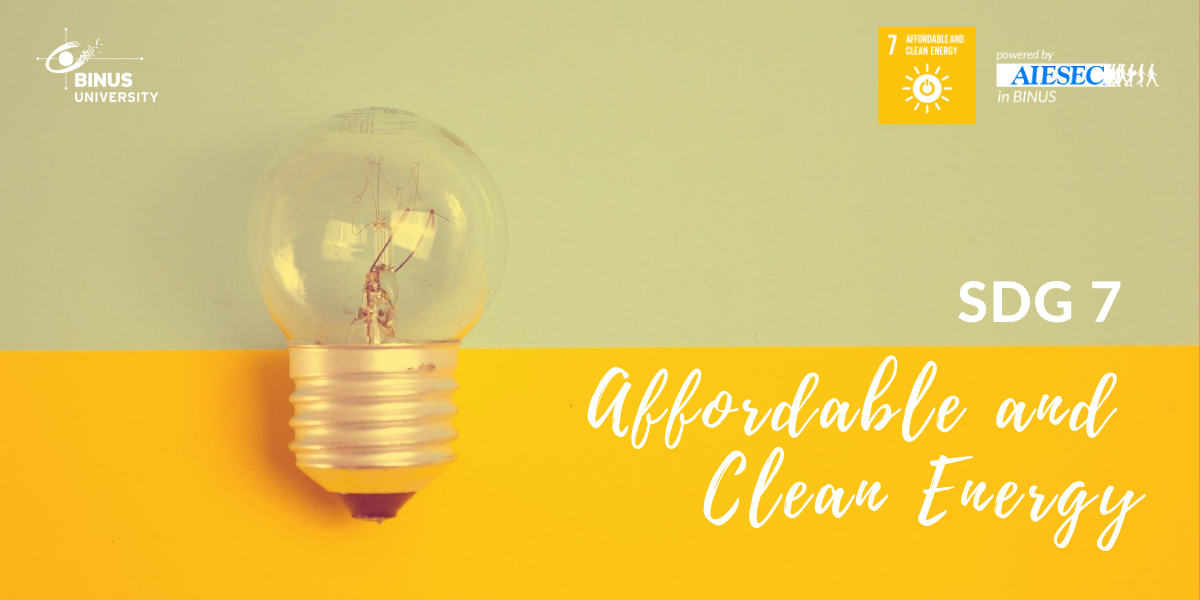 SDG 7 discusses ensuring access to affordable, reliable, sustainable, and modern energy for all, this is considered one of the most important SDGs because it serves as an important foundation in achieving other SDGs. There is no development without triggering the engine of growth. Energy is very important and people who do not have sustainable access to energy lose the opportunity to be part of national and global progress. However, progress in all these areas is still far from what is needed to achieve the goal by 2030. Increased funding and more bold policies are needed to jointly with the countries of the world embrace new technologies to achieve universal access to affordable electricity, reliable, and sustainable.

According to the Secretary-General of the United Nations, Ban Ki-moon, “Energy is the golden thread that connects economic growth, social justice, and environmental sustainability”. With access to energy, people can study, go to university, get a job, start a business – and reach their full potential. Ban Ki-moon also mentioned that energy is the center for almost every major challenge and opportunity facing the world today because it covers security, climate change, food production, employment, or increased income. The existence of sustainable energy produces opportunities to bring great changes to life, the economy, and the planet. Today we will have an in-depth look upon the world progress towards the global energy targets on access to electricity, clean cooking, renewable energy, and energy efficiency.

The fact is that about three billion people or more than 40% of the world’s population still do not have access to clean and safe fuel and technology for cooking. Lack of access to fuel and clean cooking technology presents many health hazards due to household air pollution from biomass burning which is responsible for 4 million deaths per year while placing women and children at the greatest risk. Safe and clean cooking technology alone is still the furthest behind the four energies. This is due to low consumer awareness, financing gaps, slow technological progress, and lack of infrastructure for fuel production and distribution. If the problem continues, then around 2.3 billion people will continue to use traditional cooking methods by 2030.

Until now, humans still depend a lot on unsustainable energy such as fossil fuels and can have harmful effects on the earth. In fact, energy is a major contributor to climate change, it produces around 60% of total greenhouse gas emissions. Therefore, there needs to be a solution to change the way to produce and consume energy to be sustainable. Apart from that renewable energy solutions also have cheaper, more reliable, and more efficient prices for everyday use. Implementing this new energy solution as soon as possible is important to fight climate change, which is one of the biggest threats to our own survival.

Lastly, we will check on the world progress toward energy efficiency, according to the data there is mounting evidence of the uncoupling of growth and energy use. Reducing energy intensity (the ratio of energy used per unit of GDP) can lower demand for energy, lighten the environmental footprint of energy production, and make energy more affordable. Global gross domestic product (GDP) grew nearly twice as fast as the primary energy supply in 2010-15. Economic growth outpaced growth in energy use in all regions, except for Western Asia, where GDP is heavily tied to energy-intensive industries, and in all income groups. However, progress continues to be slow in low-income countries, where energy intensity is higher than the global average.

Globally, energy intensity – the ratio of energy used per unit of GDP – fell at an accelerating pace of 2.8% in 2015, the fastest decline since 2010.  This improved the average annual decline in energy intensity to 2.2 % for the period 2010-2015. However, performance still falls short of the 2.6% yearly decline needed to meet the SDG7 target of doubling the global rate of improvement in energy efficiency by 2030. Six of the 20 countries that represent 80 percent of the world’s total primary energy supply, including Japan and the US, reduced their annual primary energy supply in 2010-15 while continuing to grow GDP – indicating a peak in energy use. Among the large energy-intensive developing economies, China and Indonesia stood out with annual improvement exceeding 3 percent.