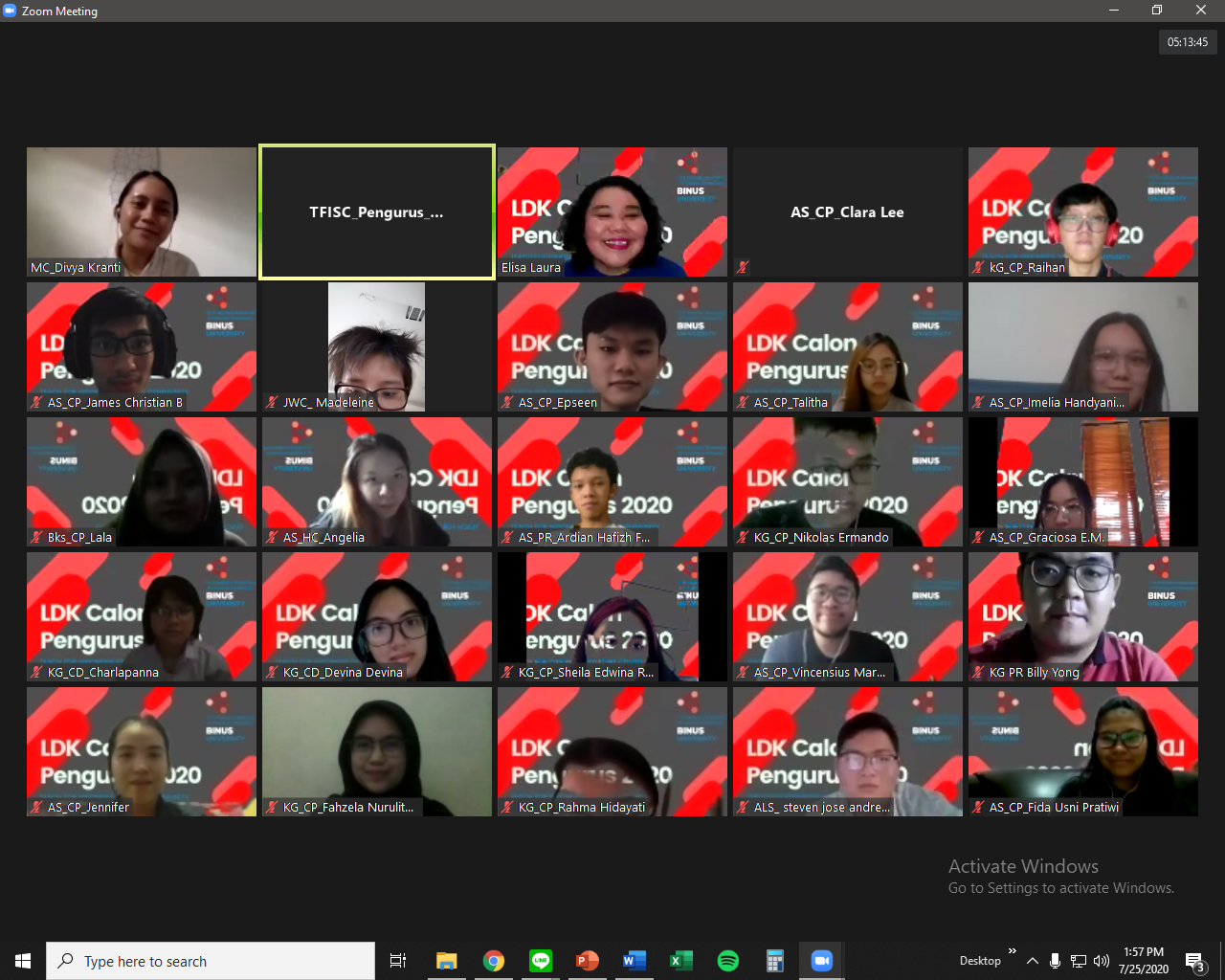 Management time is almost over, but TFISC still has to keep going. Activists who have the potential to become successors to administrators are needed. To find out activists who can continue TFISC, they are required to provide training by holding a Basic Leadership Training. The program trains activists even more about how to become good leaders and also get to know more about management at TFISC. Because the TFISC Management LDK was held during the pandemic, it was held online through the Zoom Meeting application. This online LDK lasts for two days, July 25-26, 2020, and has the theme “New Normal, New Beginning” which has an awareness that organizations must be able to adjust the current situation.

On the first day of the Management LDK, activists are required to enter the Zoom Meeting room at 9 am and open with an opening prayer to begin so that the series of events can run well. Then proceed with remarks delivered by the chair of the committee. There was an experience sharing session on divisions also by the TFISC board. Each management representative from each division was asked to tell their experience and what had to be done in their field. By sharing this experience, activists are expected to become more understanding and confident about what positions they will later take. After that, activists were given time to fill out a Google Form that contained questions about the division they wanted to take. These questions will be the basis for them to be retained during the interview. The interview is also conducted online, where the committee will invite the interviewed activist to his personal Zoom Meeting. The interview is the last part of the program on the first day of LDK. The second day was also held online through Zoom Meeting and starts at 9 am. Just like LDK on the first day, there were remarks first, starting with the committee chairman, general chair, and then the TFI manager, Mrs. Andyni Khisasi, S.E, B.A, M.Lit. After that, activists were invited to join ice breaking in the form of “online puzzles” in groups. Even though LDK is done online, activists can still play together. The series of events finally continued and began with sessions hosted by TFISC alumni on leadership, such as the keys and obstacles in implementing leadership. Not only from TFISC alumni, but there was also a session presented by Ms. Elisa Laura Munthe about “Creative in Crisis”, where activists were invited to know the importance of creativity in making progress. There is also a session titled “Know TFISC More” which is a session that contains more about TFISC. Then proceed with the case study session, the last session. This session was a presentation by activists who had been divided into groups of about 3 people. Activists are asked questions according to the division they want and answer them by presenting. After all the activist groups had their turn to present, a group photo was taken, with a Zoom Meeting screeshot from LDK Management. Do not forget the event closed with a closing prayer. From the whole series of TFISC Management LDK events through the sessions, it is hoped that activists can be responsible leaders and can continue to manage well so that TFISC can further develop. Also, stay creative with new normal now.