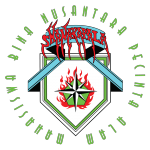 Rock climbing is an activity in which participants climb up, down or across natural rock formations or artificial rock walls. The goal is to reach the summit of a formation or the endpoint of a usually pre-defined route without falling. Due to the length and extended endurance required and because accidents are more likely to happen on the descent than the ascent, rock climbers do not usually climb back down the route. It is very rare for a climber to down climb, especially on the larger multiple pitch (class III- IV and /or multi-day grades IV-VI climbs). Professional rock climbing competitions have the objectives of either completing the route in the quickest possible time or attaining the farthest point on an increasingly difficult route. Scrambling, another activity involving the scaling of hills and similar formations, is similar to rock climbing. However, rock climbing is generally differentiated by its sustained use of hands to support the climber’s weight as well as to provide balance.

Caving – also traditionally known as spelunking in the United States and Canada and potholing in the United Kingdom and Ireland – is the recreational pastime of exploring wild (generally non-commercial) cave systems. In contrast, speleology is the scientific study of caves and the cave environment.

Rafting is recreational outdoor activities which use an inflatable raft to navigate a river or other body of water. This is often done on whitewater or different degrees of rough water. Dealing with risk and the need for teamwork is often a part of the experience. This activity as a leisure sport has become popular since the 1950s, if not earlier, evolving from individuals paddling 10 feet (3.0 m) to 14 feet (4.3 m) rafts with double-bladed paddles or oars to multi-person rafts propelled by single-bladed paddles and steered by a person at the stern, or by the use of oars.

No Event Found
view all